The sanitation project began in 2013 and is an extension of the Mother and Child Health and Hygiene Mandate of the Sri Sathya Sai Easwaramma Women’s Welfare Trust. In surveys in the local villages, restrooms were determined to be the priority, after medical camps. Indoor restrooms are being built for qualified village women in their homes. This gives the women privacy and safety, as well as more comfort and convenience, especially during the post-natal period. 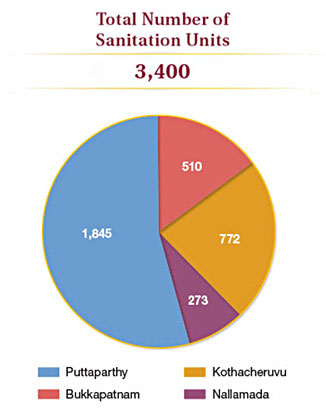 Once the sanitation give-away program was announced, an overwhelming number of applications came in; over 5,000 in the first year. Recipients were chosen, without any discrimination with regards to caste, creed or religion, according to the Trust’s need-based policies. Contractors were appointed to build the restrooms in batches. Once a batch of restrooms was completed, the keys to their individual restrooms were distributed to the villagers at a small function in the SSSEWWT office. This project is progressing very well and will continue to expand until all the villages in the surrounding areas are served.

We often hear from the beneficiaries of the sanitation program. As one lady commented:

“This is a blessing for all the villagers. We have often suffered from scorpion stings, snake bites and other problems when we get up in the middle of the night to go to the fields. I sincerely thank Bhagawan Sri Sathya Sai Baba and the Sri Sathya Sai Easwaramma Women’s Welfare Trust from the bottom of my heart and on behalf of all the ladies in the villages, for their thoughtful help.”