“There has definitely been amelioration in the position of women, but their emancipation through empowerment is still awaited!” asserted Ms Chethana Raju, on International Women’s Day, in Prashanti Nilayam on the 19th of November, 2017. Observed annually, with great fervour, joy and enthusiasm; the Ladies' Day celebrations this year, among all the festivities, also sent out a clarion call to all women! It honoured and felicitated two outstanding women, bestowing the ‘Life Time achievement Award’ on them, while encouraging others to come forward and participate in changing the world for the better – not only for themselves but for all of mankind. 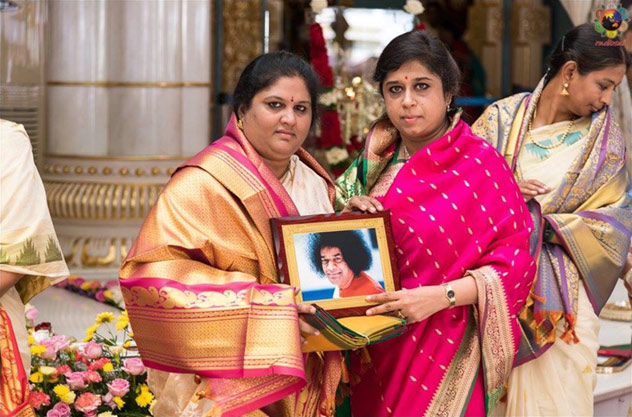 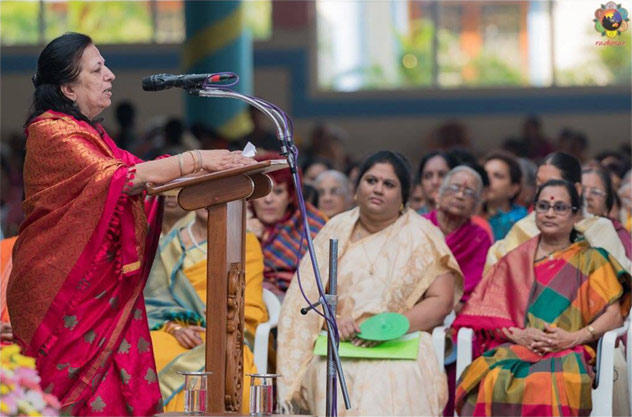 Musical performances by the popular Mambalam sisters in the morning and Ms Dana Gillespie in the evening enthralled the discerning audience. Offering of the SSSEWWT Report at the Divine Lotus Feet and distribution of Keys to the beneficiaries of the Sanitation Project of the Trust, now in it’s fourth year of operation, also took place in the morning. 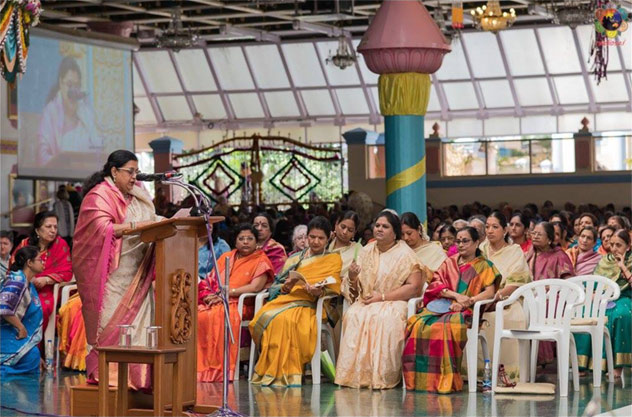 How can we forget the words of Nobel Laureate, Malala Yousafzai, “I raise up my voice-not so I can shout, but so that those without a voice can be heard...we cannot succeed when half of us are held back,” continued Ms Chethana. The next speaker, Mrs. Kamla Pandya, a practicing advocate in Mumbai, presently the Deputy National Co-ordinator for SSS Bal Vikas Education in India and newly appointed Trustee of the SSSEWWT, talked about the virtues of women as described in the Bhagavath Geeta. She stressed on the service aspect of the Sathya Sai organisation and informed the audience about how 1,30,000 women workers and 20,000 Balvikas Gurus (women) are bringing about a silent revolution in thousands of families across the country. 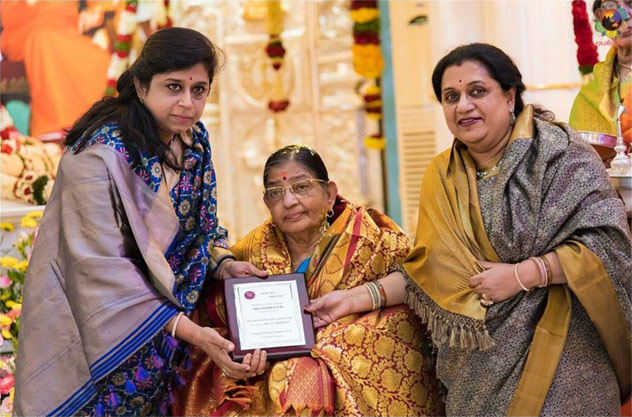 Mrs Urvi Widhani, an eminent Banker, currently working in Abu Dhabi, offered her salutations to, “the Supreme Goddess in everyone,” and offered her deep “Gratitude to Mother Sai”. She talked about her experiences at the work place where she actually experienced Swami’s Divine Presence, thus making the words, “Work is Worship”, a reality for her. Mrs Kothapalli Geetha, honoured women by playing a moving video offering reverential salutations to women! “Without women there would be no creation,” it further emphasised. At work, Ms Geetha has focussed her efforts in improving the condition of the people – especially women - in the Tribal areas that she represents. Another speaker, Mrs M. Prashanti, spoke in the evening. 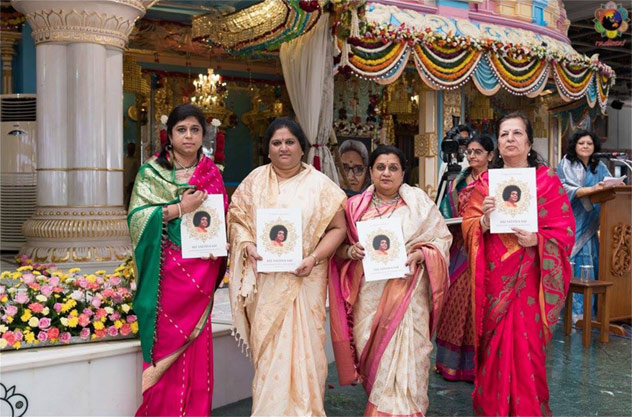 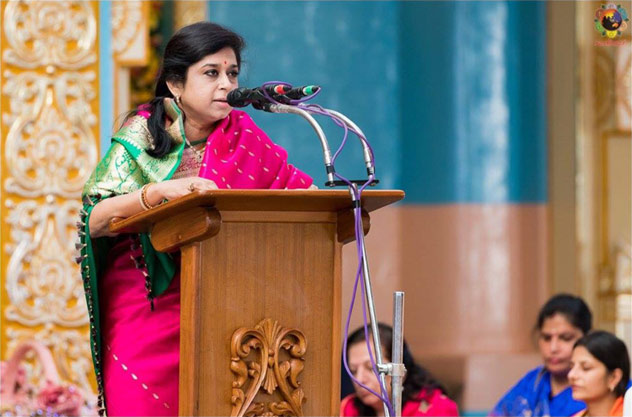 The evening programme saw the felicitation of two Outstanding women; Padma Bhushan, Smt Pulapaka Susheela, commonly known as P. Susheela and Ms. Dana Gillespie, an English actress, singer, songwriter and musician of international repute. The ‘Lifetime Achievement Award’ on behalf of Sri Sathya Sai women, was bestowed on both the singers. Smt P Susheela has sung around 40,000 songs in multiple Indian languages and received several awards for her work. Ms Gillespie has been involved in the recording of over 45 albums, and appeared in stage productions and several films. Both artists have performed in the Divine Presence on various occasions. The felicitation of both these exceptional women, received a thunderous applause from the audience. 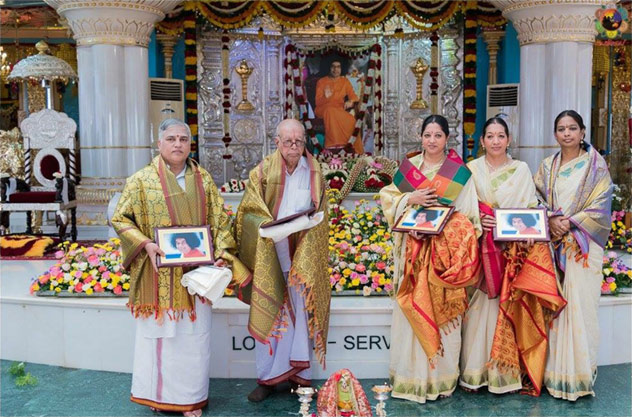 A Play by the Primary school children, Bhajans and Mangal Aarti to Bhagawan concluded the evening session. 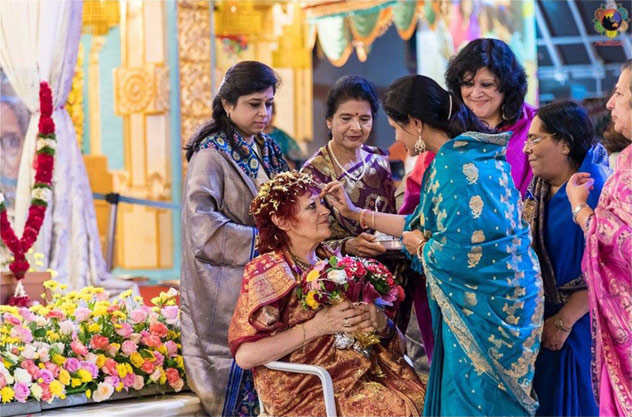 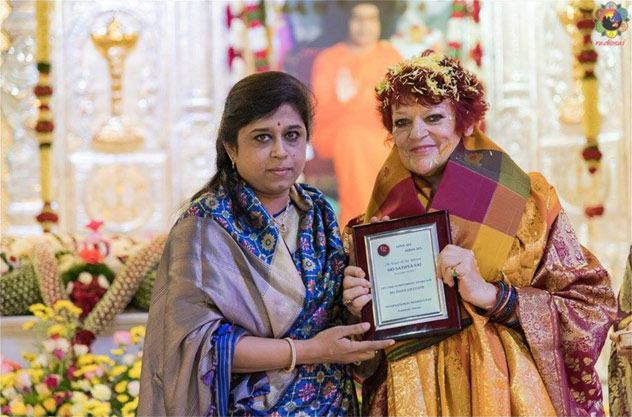